Antique stoneware crocks are an intriguing slice of Americana. Estate sale shoppers love to discover these sturdy containers that were a mainstay of kitchens from the 1700s through the early 20th century. Learn how to determine an antique crock’s value, how to tell an original stoneware crock from a reproduction, and where to find antique crocks for your home.

Earthenware pots, crocks, and jars have a long and colorful history. Stoneware crocks appear to have originally come from France.Through the American Revolutionary War, England and Germany were the main importers of stoneware crocks. Eventually, cost and market competition spurred American potters to fire up their kilns.

During the early 19th century, New Jersey, New York, and Pennsylvania produced most stoneware pottery in the United States. Several New England states, along with Ohio, jumped on the stoneware bandwagon circa the late 19th century.By the early 20th century, many American households owned stoneware crocks.

Stoneware describes a clay that has a waterproof rating of under two percent. Because the definition is so vague, stoneware can be sourced from numerous clays and can appear in diverse colors and textures. Antique stoneware crocks generally feature a gray or brown salt glaze with cobalt blue decorations.

Antique crocks have a distinctive appearance. Each stoneware crock displays a shiny-looking surface that results from the salt glazing process.

Under the glassy finish, the crock features hand-drawn or stenciled letters and numbers. Hand-painted embellishments include flowers, animals, and specific motifs or patterns.

Although simple lines and patterns are common in early-era pieces, early 1900s crocks have just a touch of art deco styling. These effects might give the crock more decorative value.

Next, the artisan formed the salt glaze. During the high-temperature firing sequence, he tossed salt into the kiln to create the glazing effect on the crock.

The salt’s sodium reacted with the clay’s silica to create a glassy coating. Although the glaze is generally colorless, coloring the salt produced a glaze with a colorful effect. Blue, brown, and purple were common color options.

Antique stoneware crocks have enjoyed many varied uses. In fact, this utilitarian crockery has taken up residence in countless American kitchens over the generations.

Even without a finish glaze, these durable and affordable vessels were watertight. A securely fitted lid would keep children, family pets, insects, and/or rodents from accessing the crock’s content.

Stoneware crocks were also pressed into service for the lacto-fermentation of foods. Crock owners would place vegetables like cabbage or cucumbers into the crock. After a defined period of time, the crock would yield a bounty of pickled vegetables, such as sauerkraut or pickles.

The Role of Redware

American potters could easily access the clay, and redware products were known to be affordable. However, redware was quite brittle and easily damaged. For those reasons, it’s rare to find an intact piece of redware today.

During the late 19th and early 20th centuries, several well-known manufacturers produced many of the salt glaze stoneware crocks in the United States. Each company had its own characteristic style and markings.

In 1901, this well-known crock maker opened its doors as Ransbottom Brothers Pottery. In 1920, the company merged with Robinson Clay Products. The merged business was known as Robinson Ransbottom Pottery.

In 1906, seven stoneware and pottery companies merged to become the Western Stoneware Co. Plants One Through Seven. The Monmouth Pottery Company was among the seven firms, and the merged company kept the Monmouth-style maple leaf logo. 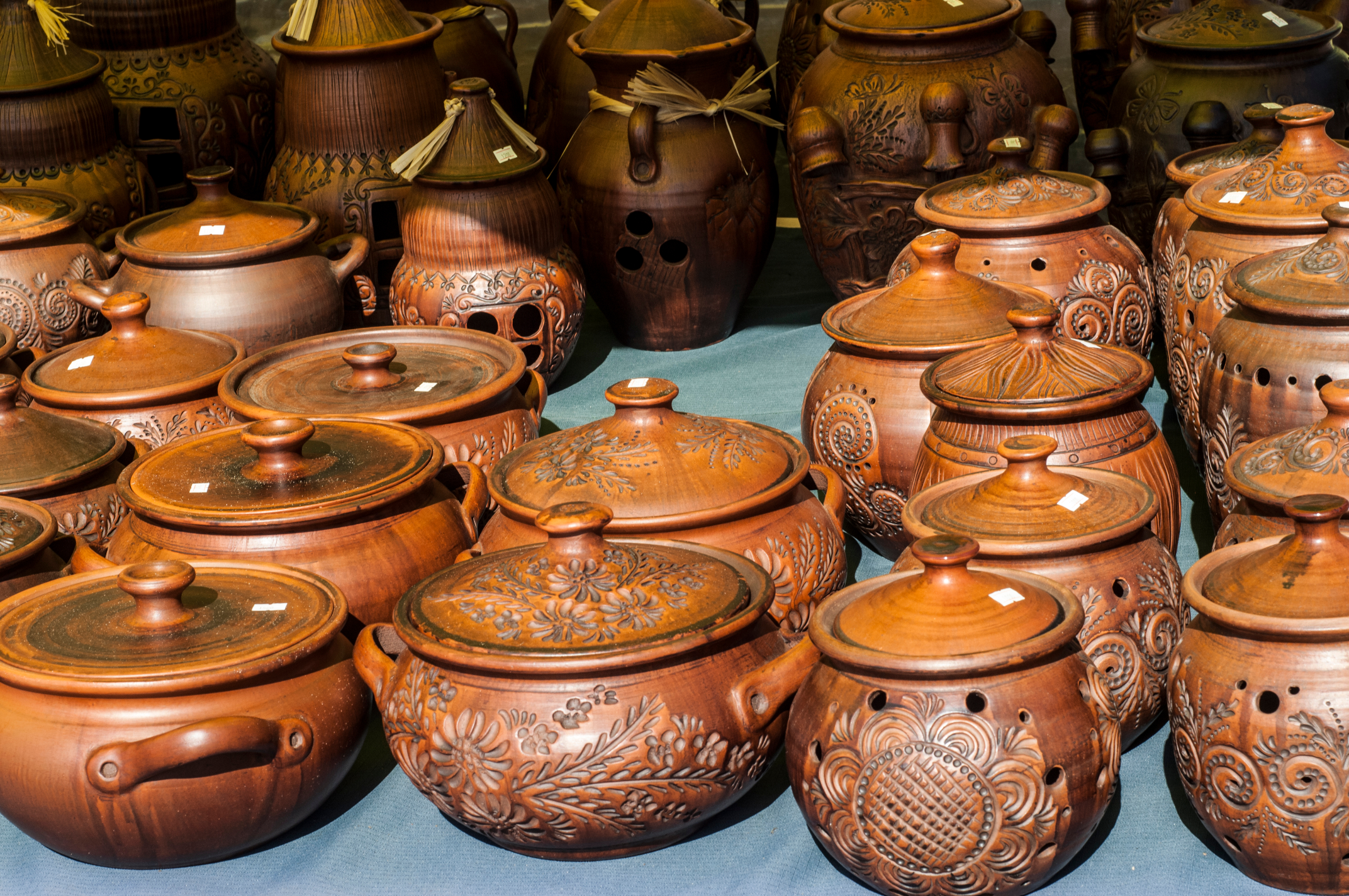 To pinpoint an antique crock’s age, take several factors into account. The first thing to know is the different eras that housed different crocks. Understanding how crocks looked across different centuries will give you some insight into a crock’s age. Next, you should look at the specifics of the antique crock. Its shape, glaze, and maker’s mark will help you paint a complete picture of the crock’s age and origin.

First, know that in the early 1700s, American potters began making and firing their own stoneware crockery. American crocks were made from the 18th century to the 20th century. If you have an idea of the types of designs that were popular during each era, it can help you in your age identification.

Throughout the 1800s, American stoneware continued to show design and quality improvements. The most prized ceramics were salt-glazed utilitarian stoneware pieces sourced from kaolin clay in Bennington, Vermont. This type of pottery was most prominent around the middle of the 19th century.

During the same time period, much of the United States population expanded westward. New stoneware potteries sprang up to meet local markets’ needs.

Regardless of a crock’s type or size, each one has a round cylindrical shape. Around 1860, this configuration became the general standard for antique crock appearance. If you find a crock that’s not in this typical shape, it was likely produced before 1860.

Most crocks contain one single number that usually states the vessel’s size. For example, a number “2” could mean 2 quarts or 2 gallons. The number may be painted, impressed, or stamped on the crock. The style, font, and even placement of the number can be useful in identifying the crock maker.

In 1720, salt-glazed stoneware came onto the market in Yorktown, Virginia and Philadelphia, Pennsylvania. However, American potters didn’t widely adopt salt glazing methods until after 1775. From 1780 to 1890, this iconic finish dominated the housewares market throughout the United States.

A legible maker’s mark, or stamp, will provide useful clues for determining a crock’s age and value. Generally found on the crock’s bottom, a maker’s mark can simply be the manufacturer’s name. Or, the mark may appear as a letter, symbol, or logo. Some manufacturers impressed their name on the crock’s side with a side wall stamp. If a master artist crafted the crock, he would usually sign the bottom of the vessel. All of these antique crock markings help identify the piece.

If the mark is worn or otherwise hard to read, make a rubbing of the mark. To do that, place a piece of paper over the mark. Rub chalk, charcoal, or a crayon over the paper’s surface.

If the pottery crock’s bottom contains a maker’s mark and pattern name, it was made after 1810. If the bottom displays the word “limited” or “Ltd.,” the crock was manufactured after 1861. If the mark states “Made in (country), it’s probably from the 1900s.

To estimate the value of antique stoneware crocks, consider several factors, including the maker’s mark, condition, and design. Some criteria may be weighted more heavily than others.

Some crock makers may be regarded more highly than others. This is especially true if that crock maker produced a particularly desirable line of crocks. Research the manufacturer to determine if this factor affects your antique crock’s value.

A stoneware crock’s clay color can help determine the crock’s maker, and it is also instrumental in finding the crock’s value. For example, the Robinson Ransbottom Blue Crown Company typically made its crocks from yellow clay.

In contrast, the Weller Company primarily built its storage vessels from white clay. This would be a good foundation color for blue & white pottery or for a piece in the white stoneware style.

Collectors enjoy finding crocks of all sizes and shapes. With that said, certain crock sizes are more desirable than others. For example, larger crocks are much rarer than gallon capacity vessels and will bring higher prices than smaller vessels.

Many antique crocks feature specific markings etched into the vessel’s bottom. The company name, logo, and varied identifying numbers are common maker’s marks. For example, Red Wing Stoneware marked every crock with its own identification number. Finally, a crock crafted by a master artist would typically carry the artist’s signature.

When determining the antique crock’s condition, first evaluate the crock’s completeness. Note if the lid and/or original handles are present. If so, that enhances the vessel’s value.

Surface crazing or hairline cracks generally do not affect the crock’s value. In fact, it may give the vessel a more authentic feel. However, cracks, chips, and heavy wear will definitely lower the crock’s overall value.

If you find a locally made antique crock for sale, it will frequently be more valuable than the same pottery crock for sale in another region. That’s often because there are more collectors for home-town pottery.

Collectively, antique stoneware crock values range from $500 to $400,000. However, actual antique crock selling prices depend on whether the crock has the iconic cobalt blue design. Based on that variable alone, selling prices fall into two general groups. This information can help you to compile an antique crocks price guide.

Consider a typical mid-19th century crock without a basic cobalt blue design. The crock’s auction selling price would likely fall in the $500 to $1000 range.

In stark contrast, a crock with an extremely detailed cobalt blue design can command a far higher price. Depending on the manufacturer, the crock can have a value in the $10,000 to $25,000 range.

Online auction sites provide actual selling prices for antique crocks. These sites offer a realistic view of antique crocks prices.
As of this article date, eBay antique stoneware selling prices ranged from $5.00 to $2350.00. The higher selling price pertained to a larger, elaborately-painted stoneware piece, while the lower price related to a small stoneware jug without any embellishments.

Old crocks’ ongoing popularity has led to an entire industry of copycat pottery. With careful attention to detail, it’s possible to tell an original crock from a reproduction.

Original salt-glazed antique crocks are very heavy. An antique crock typically has a thick structural wall, often with a telltale bow in the center.
Antique crocks feature very simple freehand-painted decorations, usually executed in cobalt blue ink. Stenciled or hand-drawn letters and numbers also appear on most old crocks. Decorations were always applied to the crock prior to the glazing process.

An original stoneware crock has a very shiny, glass-like surface. Random bumps are telltale signs of a salt-glazed antique crock.

Three major factors indicate that a crock is a reproduction rather than an antique. First, a copycat crock doesn’t often have any signatures or distinctive marks. Second,the vessel’s identifying letters and numbers look perfectly printed or stamped. Most importantly, if the crock’s decorations have been painted over the glazing, the item is definitely a copycat crock.

Where to Find Antique Crocks

With so many antique stoneware crocks on the market, finding a good-quality piece should be relatively simple. By consistently visiting local estate sales, auction houses, and monitoring online auction and specialty retail sites, you’ll have the best chance of scoring a pottery crock in excellent condition.

By monitoring an online auction site such as eBay, you can bid on stoneware pottery items from across the United States. You may notice listings for gallon crocks, pickle crocks, butter churns, and other types of antique crocks.
Antique-focused online retailers are good places to find old crocks in good condition. Etsy, RubyLane, Z&K Antiques, and The Internet Antique Shop each have a respectable inventory of antique stoneware crocks.

Begin your search by visiting an estate sale (or two) this weekend. Browse through every nook and cranny of the house. Estate sales are great places to find well-maintained antique crocks. If you’re lucky, you may find a gallon stoneware crock and a stoneware jug together.

Surprisingly, you can often find antique crocks at local flea markets. Dealers often clean out homes, or purchase an entire lot of items that they bring to the flea market. Visit the same flea market every week, and you could be the first person to see a just-arrived antique stoneware crock.

You’re also likely to see antique crocks at local auctions and antique shops. By getting on an auction house’s mailing list, you’ll learn about upcoming auctions with collectibles such as antique stoneware crocks.